From supporting yourself and your family to affording fun luxuries, your job is a non-negotiable part of life. Unfortunately, for many of us, work consumes more of our time than time spent with family and friends. With so much involved, the last thing anyone wants to experience is the frustrations of being mistreated in the workplace.

When you experience inappropriate behavior at work that is considered severe or unwelcome, you may be the victim of a hostile work environment. The Fair Employment and Housing Act protects employees from these experiences and allows them options should these policies be broken. There are many forms of hostile work environments that include sexual harassment or gender-based discrimination. Other forms include harassment because of: 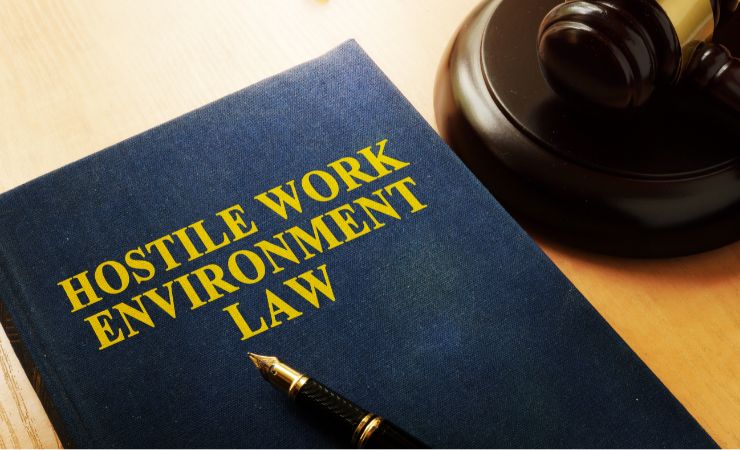 Hostile work environments are a form of harassment that expands the scope of workplace bullying. Because of its severity, the California Fair Employment and Housing Act defines the rights employees have to pursue violators legally. When both of the following are true, harassing behavior can create a hostile work environment:

Because workplace harassment is considered pervasive and severe, any offending conduct that is only occasional, isolated, sporadic, or trivial does not count as workplace harassment. However, if personal safety is threatened, there may still be grounds for a hostile work environment claim.

In any hostile work environment claim, the courts consider “reasonable person” standards, which can be viewed both objectively and subjectively.

Behaviors of a Hostile Work Environment

There are several behaviors that can be classified as part of a hostile work environment. These include:

These may seem like extreme examples, but to qualify as a hostile work environment, it must be considered severe, unwelcome, and persistent.

How to File a Claim

The United States makes sure that workers have rights, and that includes the right to be free of harassment in the workplace. Because of that, victims can invoke their rights when they have been violated.

Much like a case of discrimination, complaints of a hostile work environment must first be brought to the attention of the human resources department. Without this step, employers could find an easy way out of their legal obligation to protect their workers and provide them with a safe working environment. When the employer is notified, they have an obligation to investigate the complaint and reasonably correct the situation. Should they fail to do so, the employee has a right to request the help of the Equal Employment Opportunity Commission.

Once an employee has filed a claim with the EEOC, an investigation is generally launched, which often forces employers into a mediation process. If this does not produce an adequate resolution, then an attorney can work with you to file a claim in court.

Can You Sue for a Hostile Work Environment in California?

Yes. Employees are protected by the Fair Employment and Housing Act, which governs the treatment of workers in their place of employment. It dictates the rights an employee has and the responsibilities an employer must uphold. Violations of these should be reported to your employer first, who has the right to reasonably resolve the complaint. If they fail to do so, there are legal avenues employees can take.

How Do I Prove a Hostile Work Environment in California?

Hostile work environments can be proven in a number of ways.

What Evidence Do I Need to Prove a Hostile Work Environment?

It is important to keep a record of all harassing behavior in the workplace. This could be through a personal log that you keep when the incidents occur, email messages that contain harassing language, or any witness statements that can corroborate your experience. If you report the incident to Human Resources, you should record the date of the complaint and to whom you spoke. It is best to have some documented proof that HR was notified, such as an electronic recording.

What Compensation Can I Expect in a Hostile Work Environment Claim?

Claims for a hostile work environment could include compensation for lost wages or earnings that result from work missed because of the harassment. In addition, damages for any medical care that is required because of the impact on mental or physical health, or any emotional distress, could also be recovered in the claim.

Everyone wants to be able to enjoy their job so that they can take care of themselves and their family. If you feel you are prevented from exercising that right because of a hostile work environment, seek help as quickly as possible. You are not only entitled to a better working environment, but you may also be entitled to compensation. At the Law Offices of Miguel S. Ramirez, our team of knowledgeable experts can review your case and help determine the best course of action. Standing up to others in a hostile environment can be difficult, but you do not have to do it alone. Contact our offices today and let us help.

FILL OUT THE FORM BELOW

I went to Miguel about a potential class action lawsuit. He was recommended by another lawyer who specialized in business contract law. Miguel was very patient, thorough and very available, pointing out all the pros…

Call our law office to talk to our lawyer or
contact us online; we respond promptly to all email
messages. Se habla espanol.